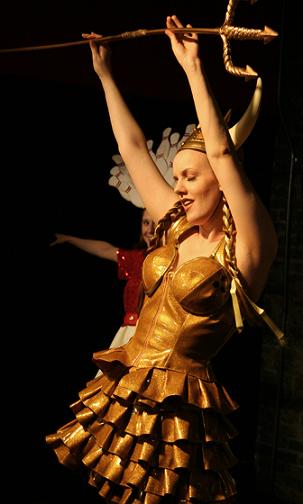 Gapers Block September 17, 2010
Of all the sources to inspire a titillate-and-tease burlesque show, “The Big Lebowski” has got to be one of the most bizarre. In truth, that’s probably half of the reason why “Rollin’ Outta Here Naked: A Big Lebowski Burlesque” works so well. The concept is so unexpected that it’s hard to wrap your head around what kind of theater you are about to witness. Bowling? Striptease? A roving band of nihilists with a pet ferret? Leave it to the Vaudezilla burlesque troupe to not only to make sense of it all, but to make it one hell of a Saturday night.
The 1998 cult film, filled with mostly unsexy, unsavory characters, gets a charming makeover without sacrificing any of the comedy. The hodgepodge mix of sketches reenacted from the film and slinking burlesque results in a no-holds-barred evening that is most certainly not your parent’s idea of a night out at the theater. “This ain’t no fancy, polite kinda show,” we’re told in the Stranger’s twanging opening monologue (played by Keith Emroll, the hardest working cast member playing the Stranger, Marty the Landlord, Burkholter and claiming the lead writer credit for the script). While most shows expect their patrons to sit politely in the dark, the “Rollin’ Outta Here Naked” cast will have none of that. Hooting, hollering, and general revelry are not only expected, they’re encouraged.
In every way, “Rollin’ Outta Here Naked” is a romp. From scene one’s slo-mo bowl to The Dude’s distinctive gait (played with obvious affection by Logan Conner) to Bunny’s green nail polish, the attention to detail is really what makes the show. Even the sequined merkins are in on the joke!
No one in the cast takes themselves too seriously. Paul Backer, with his yellow aviators and bag of dirty laundry, is a dead ringer for John Goodman’s Walter. Jesus Quintana is embodied by Maria May I and, lucky for us, she is definitely not a dead ringer for John Tuturro. Donning glittered bowling shoes and a bedazzled jumpsuit, she’s a hilarious vision as she tongues a bowling ball while wearing a goatee and sequined pasties. Local hero Donna Touch glows as Mrs. Bunny Lebowski in a high energy performance that culminates in a fevered cartwheel while wearing not much more than a single high heel. The crowd’s favorite that night was far and away the giggling video artist Knox Harrington played by a fearless Kyle Greer. Of course I’d be remiss if I didn’t mention the face and the heart of Vaudezilla, Red Hot Annie. It’s easy to see how The Dude would be seduced by Annie’s Maude especially in her burlesque number: a new take on the classic fan dance featuring a glittering sheet and lots of bare skin. She’s also the can’t-take-your-eyes-off-her centerpiece (dressed like a golden valkyrie goddess) in the appropriately flashy Gutterballs dream sequence.
While Lebowski fans will certainly love “Rollin’ Outta Here Naked,” newbies to the cult classic shouldn’t be scared off. “Naked” isn’t a scene-for-scene retelling by any stretch, but it’s a flashy, funny homage doesn’t require a primer and guarantees a great night out. And that is something The Dude would most certainly abide.
Grab a White Russian and catch “Rollin’ Outta Here Naked: A Big Lebowski Burlesque” as it continues its run at the Greenhouse Theatre (2257 N Lincoln Avenue) through September. The show is performed Fridays at 10pm and Saturdays at 10pm and midnight. Tickets are $15 in advance and can be purchased off Vaudezilla’s website.
photo by Pamela Neko
— Katie Donbavand