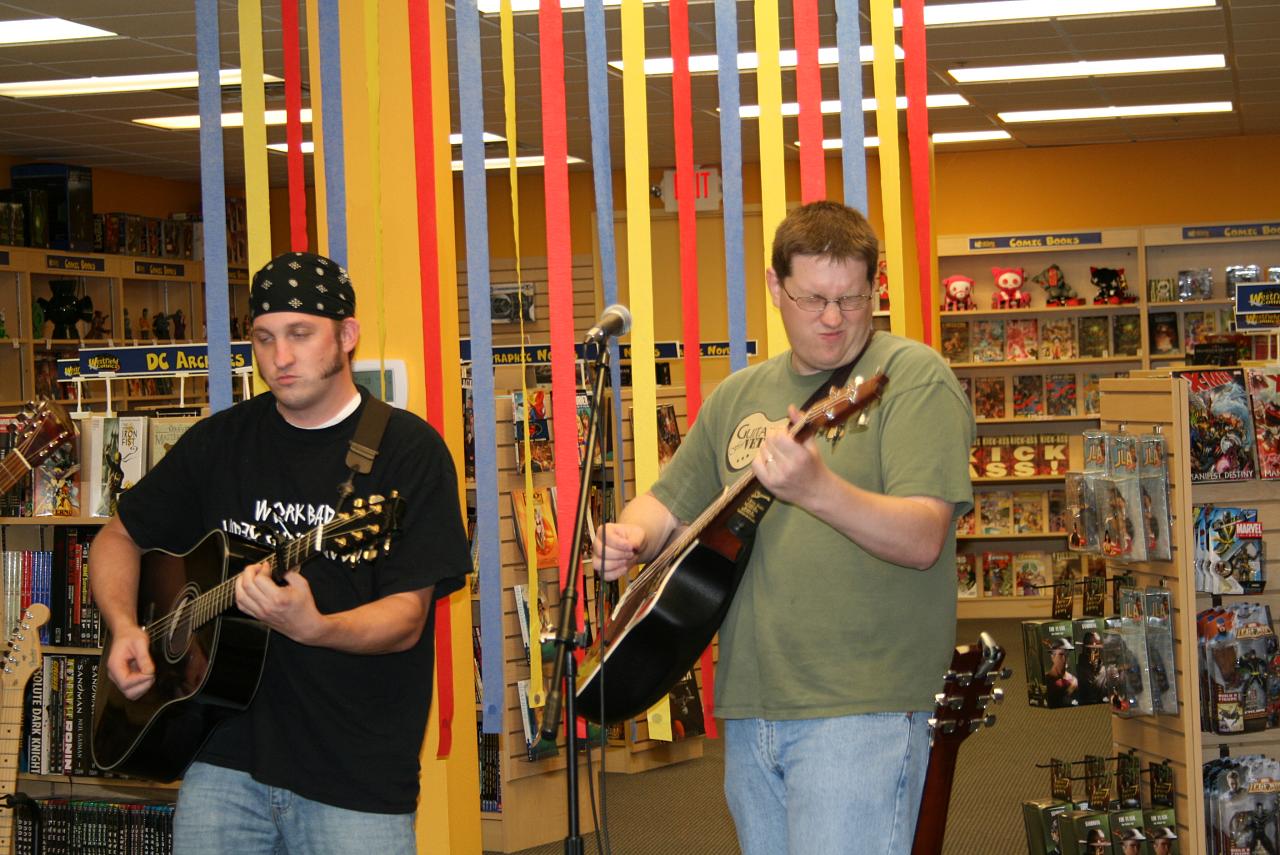 Gozamos April 30, 2010
They don’t wear leather pants and lick microphones. Panties aren’t flung onstage during their sets and they (almost never) trash their hotel rooms. Wednesday Heroes aren’t your typical Rock Gods.
Made up of Jerrod Begora, Greg Johnson, and PT Hylton, Wednesday Heroes is the midwest’s supreme comic book rock band. Their songs are clever, catchy and all sorts of geeky-cool fun. ‘Captain, My Captain’ is a memorable ditty about Captain America and his legendary battles against Nazis and Communists. ‘The Ballad of a Bland Hero’ is a slow, make-out jam about the much lamer (at least compared to Wolverine) Cyclops. They even have a hilarious music video (complete with a sexy hot tub scene) to accompany their pop song ‘Invisible Girl’ which outlines the trials and tribulations of dating, you guessed it, the Invisible Girl.
Just like the Justice League formed to make the world a better place, so did Wednesday Heroes. Instead of capes and spandex, their quest has them wielding guitars and self-deprecating senses of humor. The three friends, all hailing from Marengo, Illinois, were at a backyard cookout when someone brought out a guitar. Jerrod began playing a couple of songs about superheroes that he had made up to amuse his son. Greg and PT, both also enthusiastic comic book fans and musicians, were immediately hooked. According to Jerrod, “Soon we were all writing superhero songs. Next thing I knew, we were spending our weekends playing comic book shops and conventions.”
Wednesday Heroes’ fan base has grown from just Jerrod’s son. They have a devoted set of followers who can’t get enough of their niche music. “The fans are great. I think they are excited to listen to a band that shares their over-the-top love of the comic book art form.”
Ask any comic book fan (Marvel or DC) and they’ll tell you that the amount of source material for potential Wednesday Heroes songs is endless. “Comic books are all about big actions and big emotions,” says Jerrod. “Singing about comic books lets us express ourselves as energetically, wildly, or even melodramatically as we want without coming off as too sappy or self-importantly (hopefully).” There’s also the iconography of superheroes to consider. They’re massively appearing, easily referenced Goliaths of pop culture. “You say ‘Batman’ and that is like a short-hand for lonely, dark, and brooding. Everybody has some sort of basic superhero knowledge, even if they are not comic book readers.”
So after all that valuable research sorting through comic books and superhero sagas to mine for new material to write their songs, what super power would Jerrod choose? “The power to rock. Wait,” he pauses and follows it up with a sly, “we already have that.”
Ready to get the geek rocked out of you? Wednesday Heroes performs at Challengers Comics + Conversation (1845 N. Western Avenue) on Saturday May 1st in celebration of Free Comic Book Day. They take the stage at 3 pm but will be in store all day to sell their on-the-spot improvised “Sonic Sketches” where they write and record an original song for you.